In one recent news cycle, we had four stories that said it all.

A Walgreens pharmacist refused to sell miscarriage medication to a woman because it “goes against his ethics.” He was selling more than a drug.

The U.S. Supreme Court kicked the can on a baker who refused to decorate a wedding cake for a gay couple. He was selling more than a cake.

A Las Vegas self-described successful pimp runs for office in opposition to a Trump-backed candidate. He was selling what Stormy Daniels sells.

Sarah Huckabee Sanders is told to leave a chain restaurant. She was selling….”

In this world, you are what you sell.

Along comes Sanders eating in a cheesy rural restaurant despite her combined family income of half-a-million dollars, and she’s asked to leave. Why? Because of what she sells.

You have to be sleazier than your boss to sell what you don’t believe in, and she sells: racism, abject cruelty, uncivility, hate-mongering, more lies than even Fox News can keep up with:

xenophobia (made obvious more times than we can count),

atychiphobia (failure, which he has experienced many times),

gamophobia (no, it’s not about female legs),

hippopotomonstrosesquippedaliophobia  (because of his Twitter addiction, probably associated with somniphobia),

probably vehophobia at this point, assuming he would be capable of it,

basiphobia, if you notice how he negotiates stairs,

metathesiophobia (we’d be surprised if he could change his shorts at this point),

philophobia (he buys his wives),

allodoxaphobia, what his twit tweets are all about,

and probably chaetophobia, unless it’s many hair plugs and extensive combovers.

For just one of those things, the Red Hen owner took action and expressed what she apparently sells.

She had more reasons for shunning than an Amish caravan. 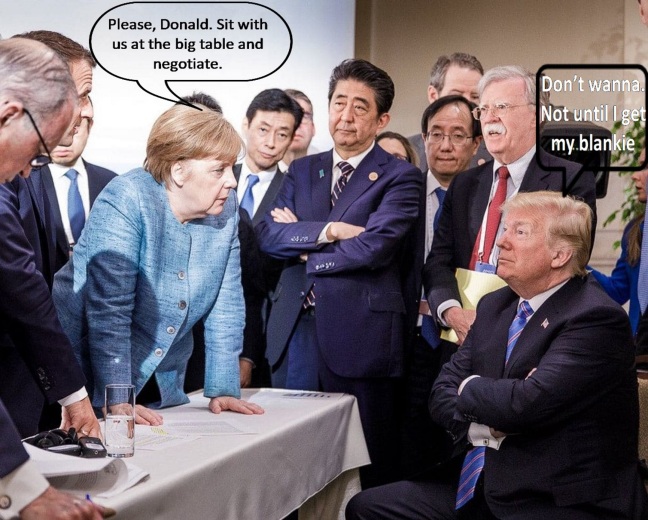 It finally happened. We should have known this day would come.

President Donald J. Trump finally lost track of his lies when he made a surprise appearance in the White House press room and strode to the podium where he turned his back on the reporters and addressed the wall.

He said, “All my lies have been lies.” Then he left the room, backing out and slamming into the door before turning and heading back to the Oval Office.

Everyone in the room was dumbfounded. How were they to interpret what he just told them.

Heretofore, all he ever uttered was a lie. Now he was telling them that his lies were lies. Logically, that statement also is a lie.

But, that would mean that all his lies have been the truth. Constant fact-checking, however, had shown them to be untruths. He said Canada burned down the White House in 1812, but it didn’t; the British did. His assertion was a flat-out lie.

Arguing among themselves, some of the reporters suggested that maybe for the first time ever, Trump had told the truth. The rest of the reporters broke out into unrestrained guffaws at the ridiculous idea.

Yet, they could not offer a counter-argument.

Just then, Sarah Huckabee Sanders entered the room for her daily press briefing.

Asked about the President’s statement that “All of my lies have been lies,” Sanders denied that he said 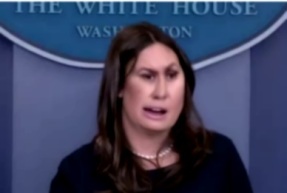 it. Then she added with characteristic snideness, “What he said was all of his truths had been truths. You biased bastards are just trying to twist his words again.”

When the reporters almost as one offered to play back his statement for her, she said not to bother, she would still deny it.

“Does that mean you won’t deny it?” shouted one of the reporters.

“Watch FOX news, they’ll straighten it all out for you,” she said, slamming her folder and walking out of the room.

There is no need to amend or eliminate the Second Amendment to protect us from the mass shootings, or even the single shootings, that proliferate around the country year after year after years. The amendment is perfect as is; it’s the people who cite only part of it who are imperfect. In fact, as written and interpreted by the U.S. Supreme Court until several years ago, the nation’s maniacal gun problem should never have existed.

The Second Amendment reads: “A well-regulated militia being necessary to the  security of a free state, the right of the people to keep and bear arms shall not 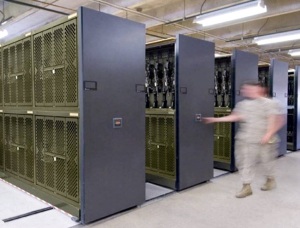 be infringed.” The first half would not have been included if the drafters of the Constitution intended the second half to stand alone, as the gun nuts wish.

The militias still exist as the state National Guards that have armories where weapons are kept. Guard members are allowed to use those weapons for training, practice and for use when the guard is mobilized. Since the Second Amendment exists only for the sake of maintaining militias, all guns (personal and state-owned) could be required to be kept in the armories and checked out only under conditions and circumstances established by the guard. It could even allow them to be checked out for hunting purposes.

Strictly enforced, guns eventually would no longer be available to those who would shoot a child. It may be too late to fix global warming, but there’s still time to make the NRA society’s friend instead of its enemy.

The problem of over-prescribed opiods has received a lot of attention of late—justifiably so—but there is a much bigger drug-prescribing problem that affects just about all of us. The federal government subsidizes much of it, and your doctor, pharmacist and health-insurance company are complicit.

In 2016, the American public spent $374 billion on prescription drugs. That figure is projected to nearly double in the next four years to $610 billion, more than half a trillion dollars.

Why? As demonstrated to us by now-jailbird Martin Skreli, the man without a moral cell in his body, the pharmaceutical industry will charge whatever the market will bear, and that appears to be an awful lot.

This problem, however, is closer to home.  You can’t dictate what others in the prescription chain should or will do, but you can reduce your own costs—along with risks of side effects that all drugs have, even aspirin—at least for drugs for treating non-life-threatening conditions. That includes just about all of those opioids.

It’s called pill-splitting, and the beauty of it is that if a quarter of a pill, or half of one, doesn’t do the job for you, you can always return to taking the entire pill as prescribed. But, at least you will find out what dosage is right for your condition.

You may ask that if a quarter of a pill works for your condition, why don’t drug makers make one in that dosage instead of four times as much.

We may attempt to answer.

All drugs sold in the United States must meet the approval of the Food and Drug Administration. It’s one of those regulatory agencies that libertarians and other conservatives love to hate, almost always without realizing the good it produces.

To get FDA approval, a drug maker must put its pills through excruciating clinical trials at great expense, quite often the expense shared by the National Institutes of Health.  Understandably, the pharmaceutical company will want to try a dosage big enough to demonstrate early that it is efficacious and that is big enough to justify its production and by-the-way bigger profit margin.

That’s why you rarely will see a pill marketed in a dosage level under five or 10 milligrams. Yet, if you give it a try, again especially with opioids, you may find that 2.5 milligrams or even 1.25 milligrams will do the trick. Do the math. Splitting your pills in half means you save half the cost, by quarters means you save three quarters of the cost.

Why shouldn’t that be a no-brainer? Because no one in the chain of your drug’s distribution tells you so. Obviously, the pharma company isn’t going to tell you because it will lose profits. But, how about your prescribing physician? Is it the fear of getting sued if he or she strays from the well-trodden path and gives you a sane suggestion? Probably not, it’s just habit, perhaps even laziness.

That last part of the prescription chain, we don’t understand. Insurance companies usually have committees of physicians they employ to advise on their formulary, so perhaps it is that old fear of being sued that takes place. We can understand that it also may fear being sued by a patient whose pill-splitting went wrong, but that threat shouldn’t include advising a patient of the option—again, for non-life-threatening drugs only.

But, you can take the situation into your own hands, damn the torpedoes and full speed ahead, and split those pills until you find the least amount of dosage that works for you. Especially if you are taking opioids.

We do add one caveat here. Particularly with habit-forming drugs such as opioids and other pain-killers, you may have been taking them long enough that you have built up a dependence on those dosages, and splitting the pill will not work for you. But, it doesn’t hurt to try it, as long as the condition is not life-threatening.

There is an added reason why you may wish to consider pill-splitting. As we write this the U.S. government is investigating dozens of makers of generic drugs—most generics makers are in India—for likely price-fixing collusion. You may have noticed that some of your generics drugs have gone way up in price recently. Apparently, the government knows why and is taking action.